This is the first cheesecake I have ever made.

And not to toot my own horn, but it’s pretty damn good.

A couple of weeks ago I was making a salad with goat cheese (amongst other things but I won’t bore you) for dinner, and I was just marvelling at how DELICIOUS the combination of chèvre cheese and honey is. Inspiration then struck, and I decided that it NEEDED to become a cheesecake.

I then read about 10 different guides to cheesecake (typical Saturday), and learned 3 key takeaways:

Based on the above, you will see that it is a good idea to make this cheesecake the day before or at least the morning of a dinner party if you’re serving this for dessert, as you bake the cake for an hour, cool in the oven for an hour, cool at room temperature for at least 2 hours, then in the fridge for at least 4 hours.  I feel like I should reiterate that the hands on time is relatively minimal and extremely straightforward, but as Pastry God Dominique Ansel says, “Time is an Ingredient”.

Another ingredient here is temperature.  Make sure your cream cheese and goat cheese are room temperature!  To speed up the “thaw”, I cut them into small pieces and let them sit on a cutting board for a bit.

So now that you’re prepared in the ultimate executive summary of cheesecake, why not give it a try?

Preheat oven to 350F and tightly wrap the outside of a 9-10 inch springform pan in foil.  This will ensure that no water leaks into the pan when it is set in the waterbath.  Grease the inside of the pan with a bit of butter.

Mix together graham cracker crumbs and brown butter in a medium bowl until combined.  The mixture will have the texture of wet sand.  Press into the bottom of the springform pan with the bottom of a flat glass until smooth.  Bake for 9 minutes until golden brown and allow to cool. 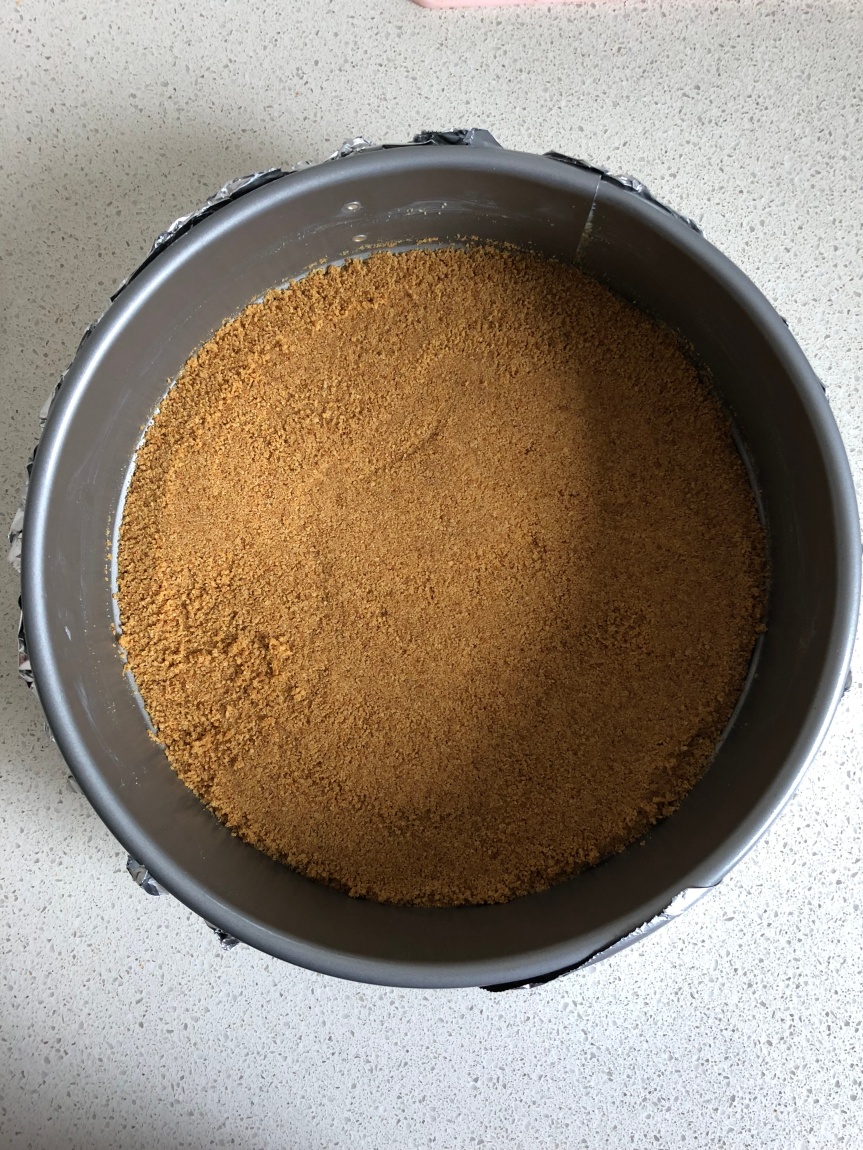 To make the filling, mix together cream cheese, sugar and salt with the paddle attachment of an electric mixer until smooth. It is important that the cream cheese is room temperature as otherwise the filling will be lumpy. 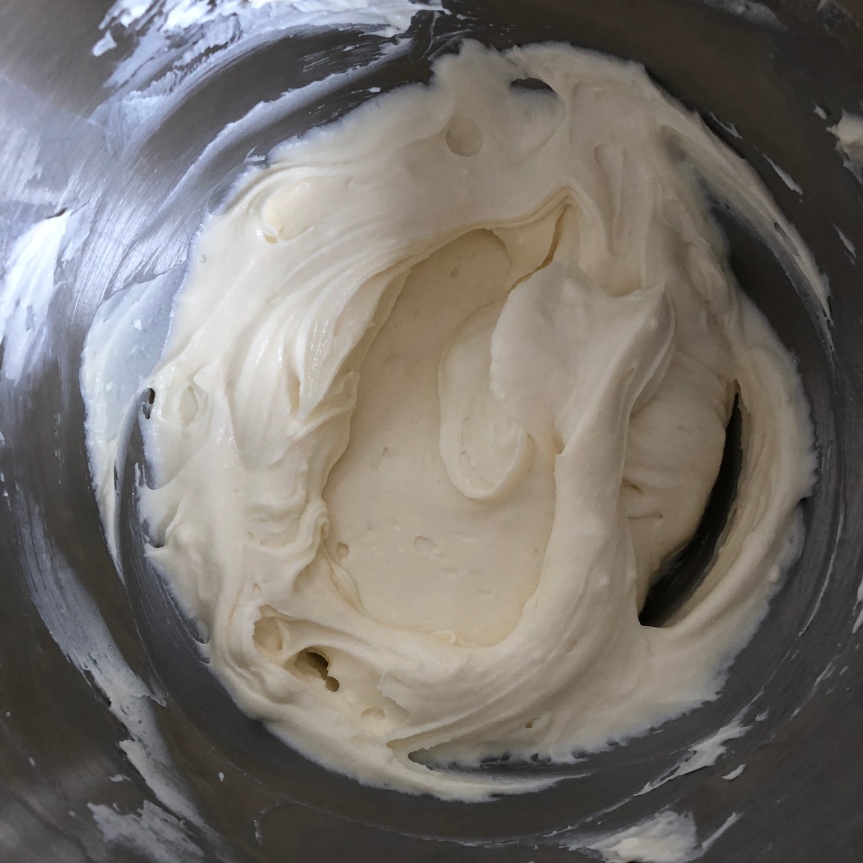 Add softened goat cheese, sour cream, honey, lemon juice and vanilla to the cream cheese mixture, mixing until thoroughly combined and smooth.  Add eggs one at a time, mixing until just incorporated.  The mixture will be thick, smooth and silky (a few dots of cream cheese are ok). 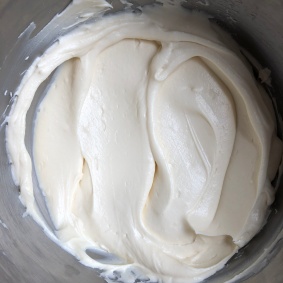 Pour filling over cooled crust and if desired, drizzle more honey over the top and swirl with a paring knife for decoration. 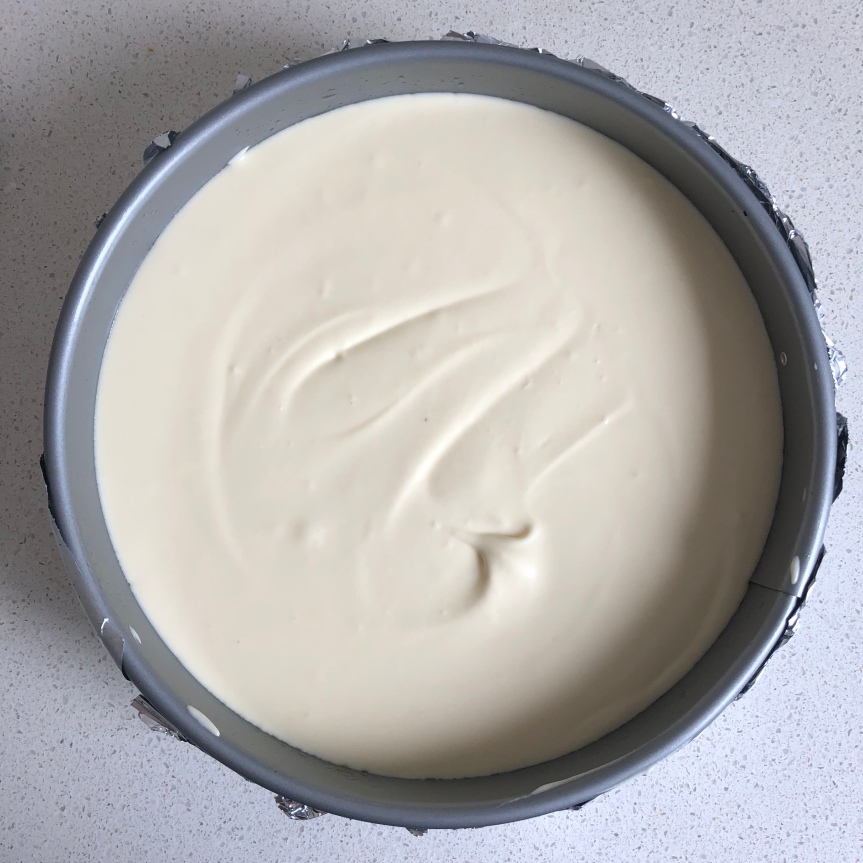 Bake for one hour, until the edges are puffed and set and the centre still jiggles like Jello when you shake the pan (gently).  Once done, turn off the oven and open the oven door to allow the cheesecake to cool slowly in the oven for one hour.

Remove the cheesecake from the waterbath and remove foil from the pan.  Gently run a paring knife around the outside edge of the cheesecake to separate from the pan (less chance of cracking), and allow to cool COMPLETELY at room temperature on a wire rack.  Once cool, refrigerate uncovered for at least 4-5 hours.

To make rhubarb compote, mix rhubarb and sugar in a medium bowl and allow to sit for 10 minutes to release rhubarb juices.  Transfer mixture to a saucepan and bring to medium heat.  As the juices begin to simmer, mix often to break up the rhubarb.  It is done when the rhubarb has broken down and most of the liquid has evaporated (although you can simmer down to your desired thickness).  Allow to cool completely.

Top cheesecake (or pieces) with compote as desired, and enjoy!

It should come as no surprise that rhubarb is one of my favourite things to bake with, partially because it coincides with emerging from our winter cocoons and the sun returning to our lives🌞 The rhubarb cake from #dessertperson is one of my favourite recipes to use up a bunch of rhubarb and is the perfect addition to a spring get together💃🏻🥰
When we were in Charleston, I had a biscuit that nearly brought me to happy tears at @millersallday and was determined to figure it out myself. This was my first attempt at a biscuit (topped with honey butter, ricotta, rhubarb compote and a nice drizzle of honey) and while I have some tweaks to make to get to the Miller level, it’s a pretty friggin nice Sunday treat🥰
I added toasted pecans to my tahini brown butter chocolate chunk cookies and let me tell you, it was an EXCELLENT idea!! Also when I say chocolate chunk it usually ends up more like chocolate puddle, which to me is the joy of using @valrhonausa feves! Recipe link in bio (just add 1 cup roughly chopped toasted pecans with the chocolate).
A closer look at this weekend’s carrot cake with brown butter cream cheese icing👀👀👀 Let’s just say I’m very sad it’s gone🤪
Whenever April hits my usual though surrounds “is rhubarb here yet”. In Toronto the answer is usually no, but we can dream of hot pink stalks ready to be tossed into cakes, pies, tarts or just over ice cream. I’ll let everyone know when I’m successful in my hunt🤪☀️😎
I made a point to do a @target run in Charleston as any good Canadian does, and picked up these adorable mini skillets from their @magnolia collection (amongst a couple other things👀🤪😎). What a perfect vessel they are for these mini skillet cookies! I used my super stuffed skillet cookie recipe but cut it in half and filled them with cookie butter instead of dulce de leche and sprinkled in crushed Graham crackers instead of pretzels, and oh man they are SO GOOD! Stuffing a cookie with cookie butter might be a little meta, but let me tell you it is certainly a good idea!!! Recipe link for my OG skillet cookie in the bio and friendly reminder to make it your own!
Yes I know I have been MIA but I was busy all week eating all the time in Charleston (and DC)! I knew it was a food city but WOW, every meal was an absolute knockout. Here are a few treats we tried, plus some non-sweet things as well🤪 Worth noting is the biscuit in photo number 4 which almost brought me to tears, partially because I don’t know if I can ever make one that good🤪🤷🏼‍♀️ Restaurants are tagged!
I hadn’t made these salty coffee brownie cookies in SO LONG but started thinking about them this morning and couldn’t not make them to reboot my cookie stash? They’re chewy and deeply chocolatey, a brownie in a cookie with plenty of flaky salt, just the way I like it💃🏻 Recipe by @thaliaho and chocolate from @thechocolateria
Well it was very lucky that I made that banoffee pie yesterday because I TOTALLY forgot it was Pi(e) Day! I made this caramelized white chocolate tahini pie last year specifically for Pi(e)‘s sake and it turned out beautifully. What’s everyone making?!
Loading Comments...
%d bloggers like this: