Aren’t the days between Christmas and New Year’s awesome?  I know mine were super lazy and I had no idea what day it was.  I baked and read and watched wine documentaries on Netflix.

I also woke up one day and decided scones needed to be had.  These have a lovely lemon flavour that isn’t overpowering, it adds a freshness to each bite.  They’re also perfect with tea (of course) and are highly dippable.

So as we move into 2017, treat yoself to some homemade scones in the morning.  Heck, it might even be a good resolution…

Preheat oven to 400F and line a baking sheet with parchment.

Whisk together flour, brown sugar, baking powder and salt in a large bowl.  Using a pastry cutter, cut the butter into the dry ingredients until the mixture looks like rough crumbs.  Some pea sized pieces are okay.

In a small bowl, whisk egg, sour cream, cream, vanilla and zest until combined.  Add in two parts to butter and flour mixture, mixing until just combined after each addition.

Turn dough onto floured surface and press into a disk about a half inch thick, don’t worry if it’s not perfect.  Cut disk into 8 pieces and using a spatula, transfer to prepared baking sheet.  Brush with cream and sprinkle with raw sugar if desired. 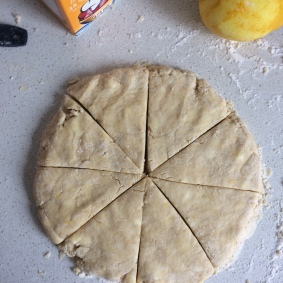