Cupcakes are essential for any birthday party, right?

In the spirit of a friend’s birthday and St.Patricks Day, I decided to whip up some Irish influenced cupcakes.  I had always heard rumblings about Guinness chocolate cake and I’ve gotta say I was impressed.  The cake texture is rich and decadent, yet it isn’t too sweet (so really you can just eat a bunch and be fine…).

The icing also has a nice hint of Bailey’s but it’s not overwhelming, although that can be easily fixed with an extra tablespoon.  This was the first time I recorded my icing recipe, (as it’s usually completely non-scientific) and you can also see the piping technique in the photos below. 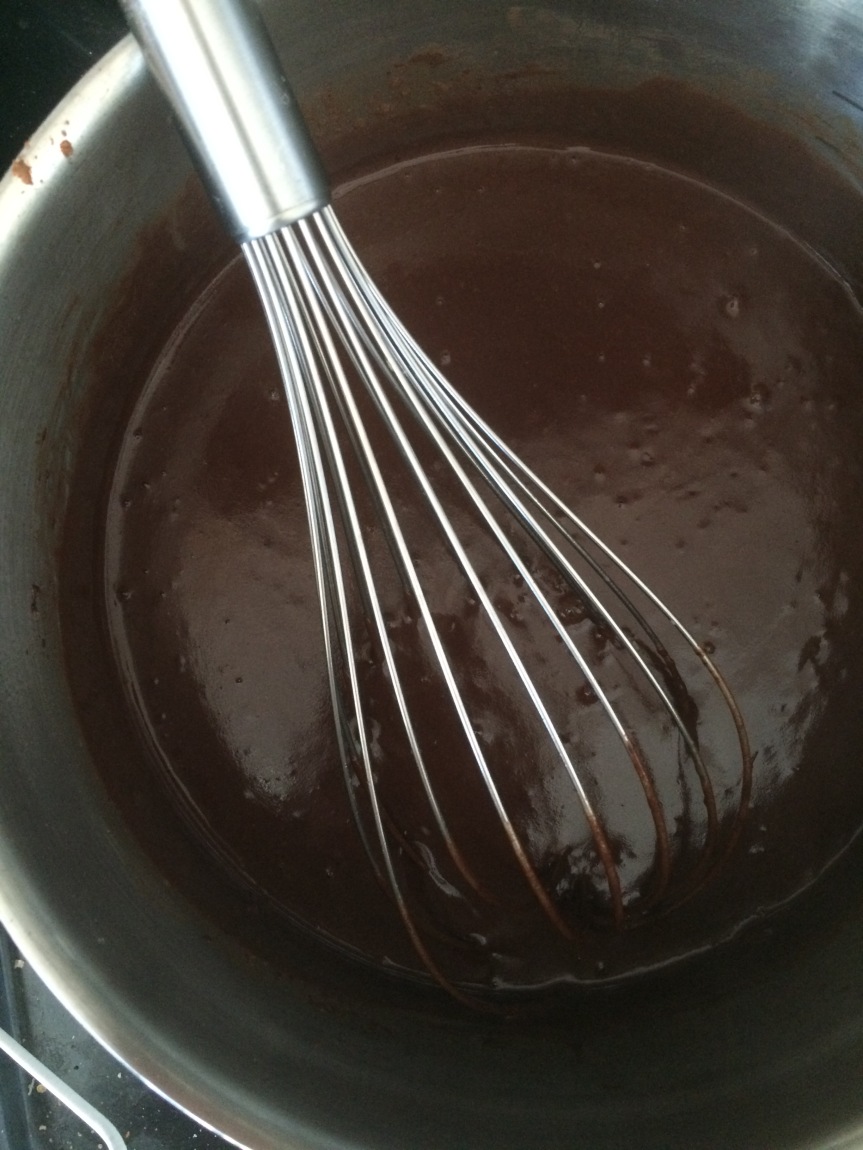 You’ll start by bringing butter and Guinness to a simmer over medium heat, then whisking in the cocoa until it’s completely smooth, like this. 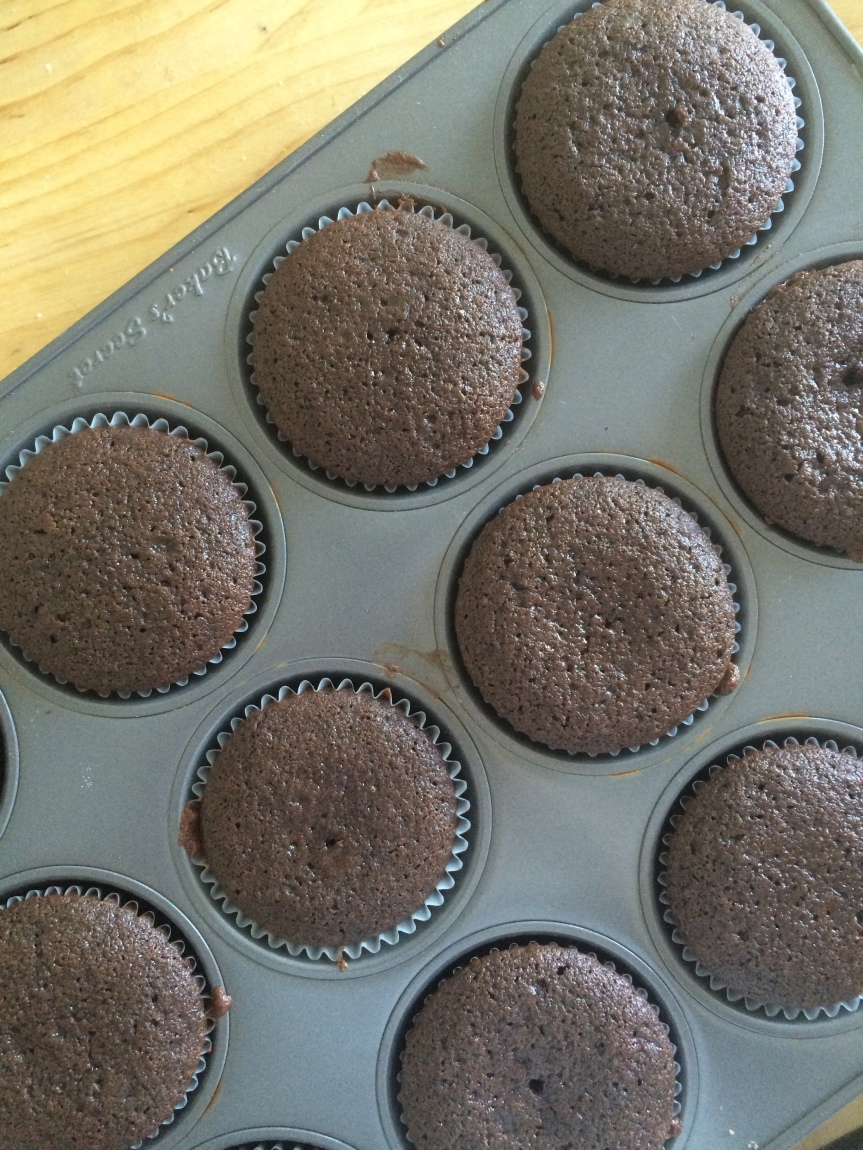 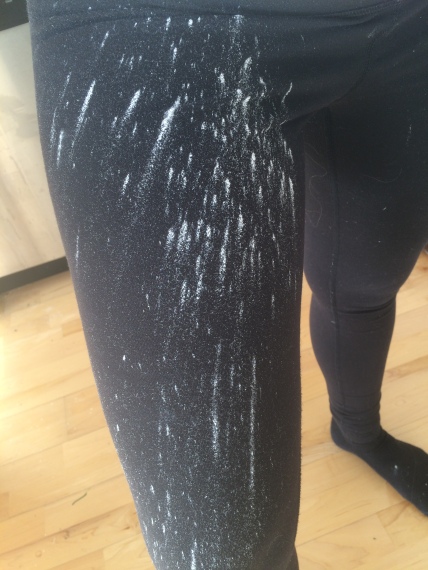 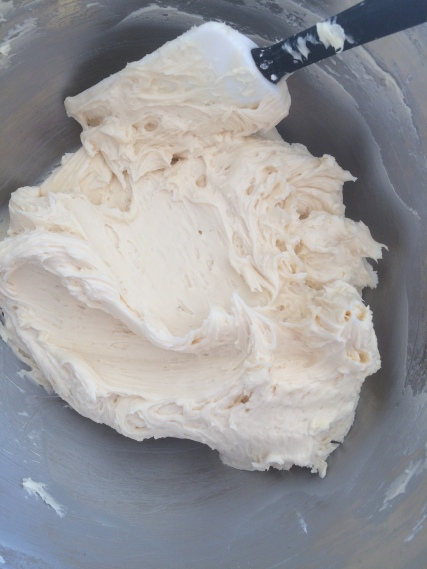 The finished icing (and the damage it created, careful with that icing sugar kids…)

You’ll want a piping bag and star type tip for the icing style below, although use any tip you think is fabulous.

For a rose effect, start in the middle of the cupcake and continue in a circle.  Make sure there are no gaps! 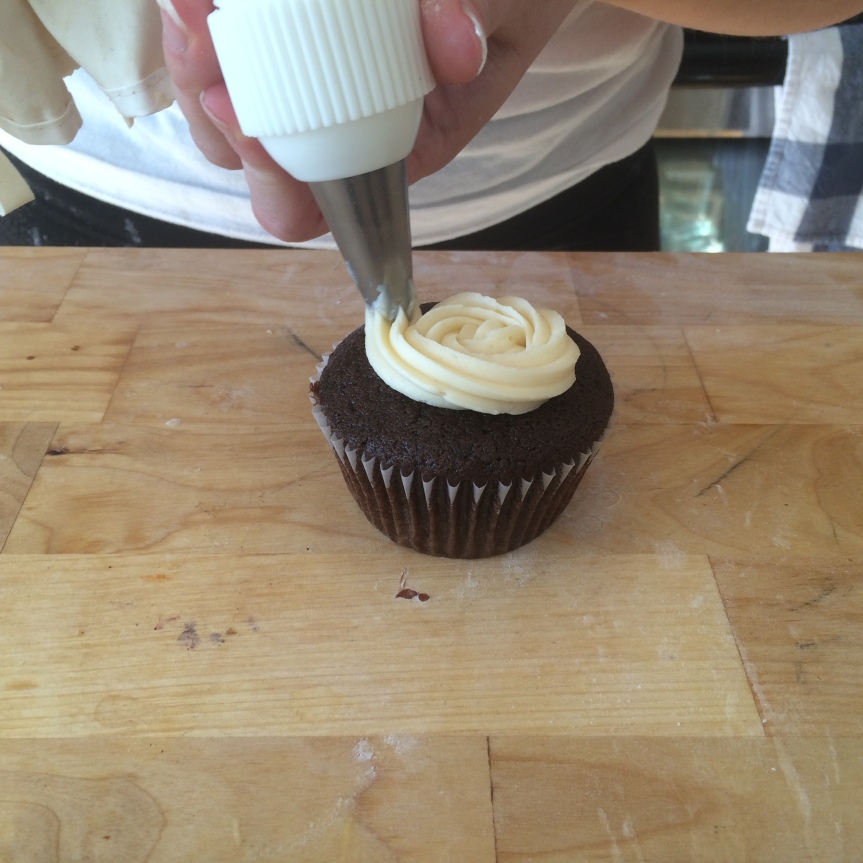 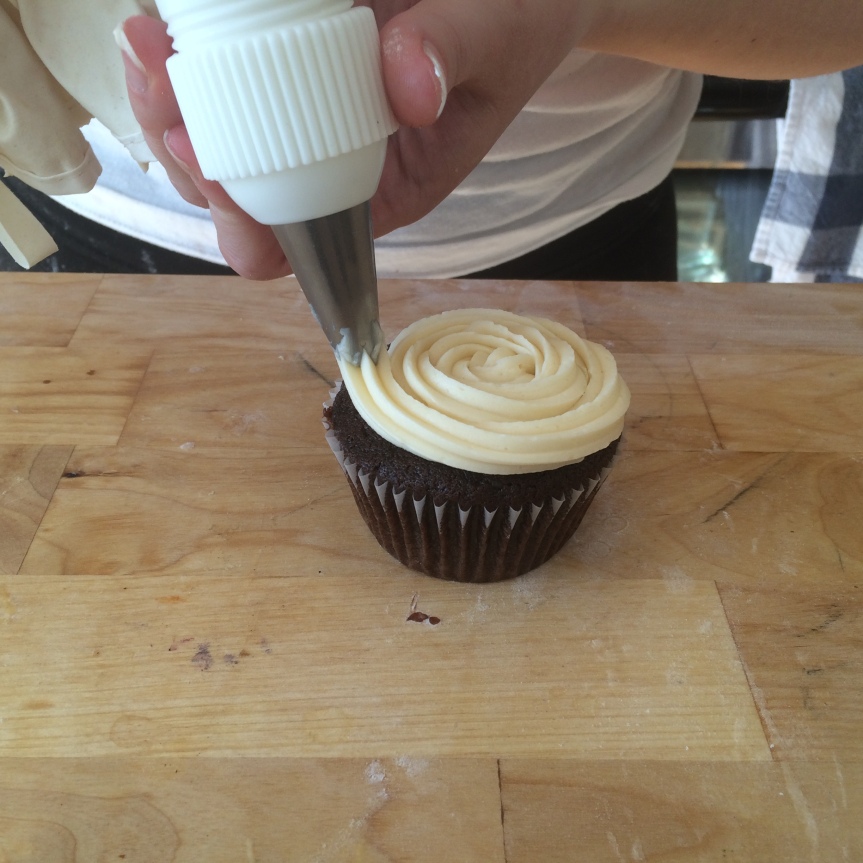 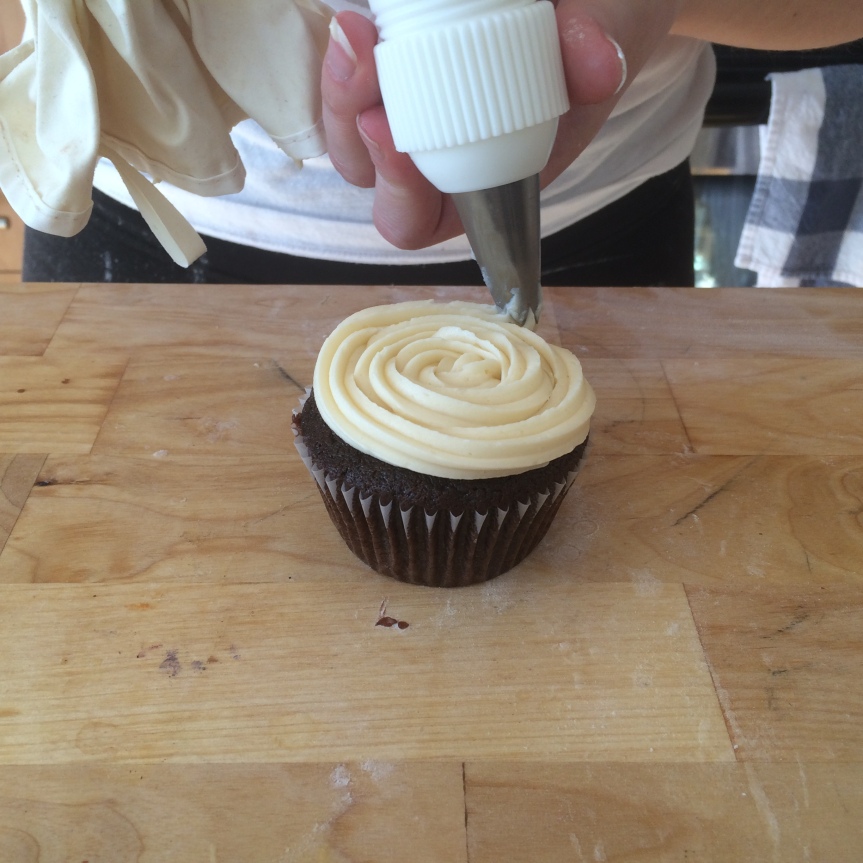 Once you reach the end, stop adding pressure to the bag and line up the icing as best you can so there isn’t an abrupt stop.  Use your finger to gently “blend” to the previous line if you like.

To create an effect like the beginning photo, start icing on the outside of the cupcake and follow the reverse steps above, continuing in smaller circles until you’re at the top of your icing mountain.  Your first attempt will be a bit of a mess, but practice makes perfect! 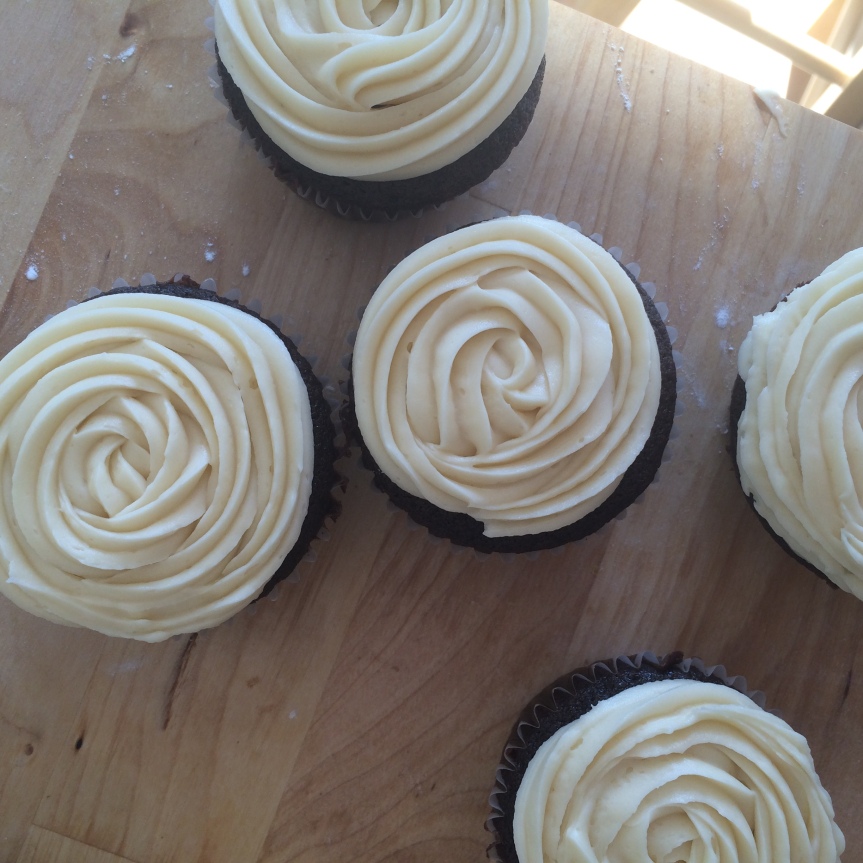 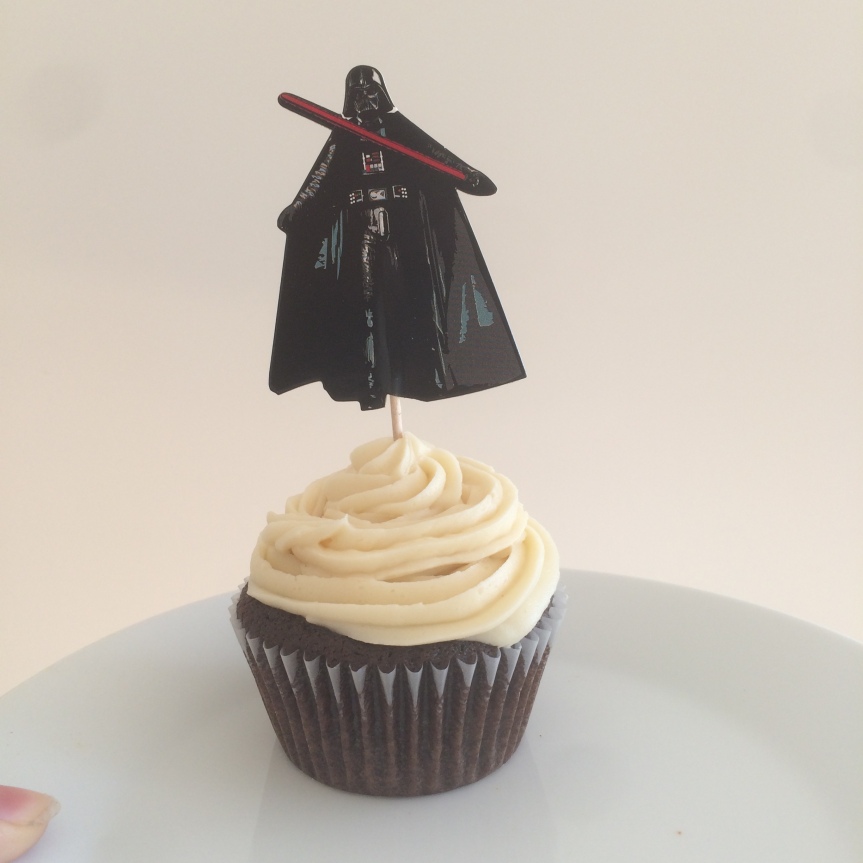 As an FYI, Williams Sonoma has an awesome Star Wars cupcake decorating pack.

As soon as I tried @spice.girl.eats Chai Concentrate, I KNEW I had to bake with it. I finally turned my daydreams into real life yesterday with this chai custard pie, and oh man she is creamy and DREAMY!!! It’s like the perfect not too sweet, nicely spicy chai in a pie and if that isn’t exactly what I want when it’s too cold to leave the house, IDK WHAT IS! Recipe link in bio!
I realized something this week that isn’t very Pie Girl of me…. I haven’t baked a pie since CANADIAN THANKSGIVING😱 The last pie bake included this little salted caramel apple number, and I think I must have just been obsessed with cookies for the last few months, but don’t worry because I will be rectifying the whole no pie problem this weekend. I’ll be keeping track on stories too so stay tuned for a fun lil baking session!
A plate full of sunshine in the form of sablés via À Table by @rebekahpeppler - one of the more perfect uses of that good neon yellow European butter (other than eating straight on radishes or bread🤷🏼‍♀️)
Wow! The weather outside is grey garbage and the whole Ontario Lockdown vibe is also garbage! You know what isn’t garbage? This gorgeous brown butter chocolate chunk cookie speckled with flaky salt that looks like the sun! Recipe link is in the bio - make them tonight, you deserve it🍪🍪🍪
Remember that pistachio olive oil cake that I “forgot” to post because it was so good? I made it again a few days ago and it continues to be absolutely perfect, partially because the olive oil keeps it moist (and maybe continuously improving) on day 2/3. Swipe to see the olive oil I used this time which is potentially my new favourite (I wanted to just eat the batter), from the lovely ladies of @saudadetoronto straight from Portugal. Recipe from @houseandhomemag by the geniuses at @emmertoronto
Another day, another fabulous @susanspungen cookie. This time I FINALLY made the peanut shortbread with honeycomb toffee and it is a knockout. Super peanutty shortbread, not too hard honeycomb toffee (Pie Girl’s first time!) and do not skip the chocolate!!! Recipe on @nytcooking
From my first saltine toffee experience in high school, I knew I was VERY into it, yet had never tried making it myself until a few days ago. A couple of things to note: it’s super easy, it makes a LOT for two people and no, you will not be able to stop eating it. Sounds like the perfect thing to make during the lazy days between Christmas and New Year’s. This recipe is from @amandascookinblog
Is this becoming a #cookiestagram only? Maybe. Will it stop soon? I don’t know. While I decide, enjoy this up close and personal shot with the @bonappetitmag pecan thumbprint cookies that were part of this year’s cookie box! While they’re a bit of a process, they’re definitely worth it and the pecan frangipane is only slightly addictive.
I made a pistachio olive oil cake yesterday that was so amazing I apparently forgot to take a photo🧐 So here’s a process shot from last weekend’s Cookie Extravaganza of the always perfect salted chocolate chunk shortbread from @alisoneroman 🍪🍪🍪
Loading Comments...
%d bloggers like this: